KATIE AND THE IRISH TEXAN, A NEW NOVELLA

I'm back! After quite a long absence from blogging on my own site, I finally have some exciting news to share with you.

For the last few months, I've been working on several projects and have completed a western historical romance novella for the Texas Code Series. Titled, KATIE AND THE IRISH TEXAN, The McTiernans, it concerns Dermot McTiernan and Katie Gilhooley and their Texas beginnings in 1873. The story begins in Jefferson and ends in Dallas. Texas was finally recovering from the war and these two cities were booming with the coming of the railroads and had populations as large as 30,000.

I hope I've captured some of the spirit of the people and the cities to tell about romance and undying love in these exciting times. The scheduled release is for June 27, 2014. 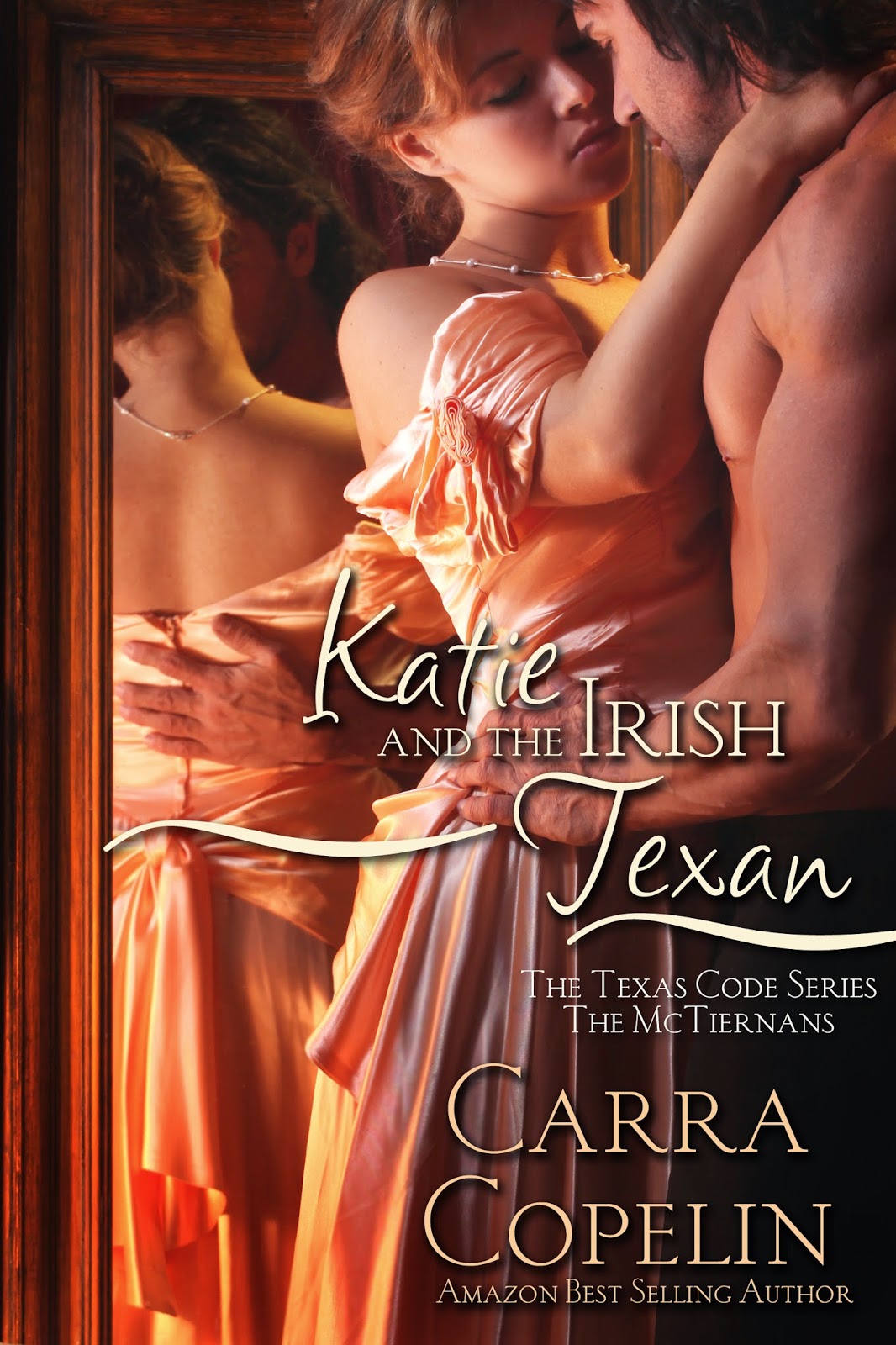 The following is a brief introduction to KATIE AND THE IRISH TEXAN.

Dermot McTiernan is determined to move on with his life after losing his one and only love to another man. He decides to try his hand at ranching in North Central Texas with his friend, Ian Benning. He figures if that doesn't work out, there are many other opportunities in the booming post-war state. When the luscious red-head from County Cork, Ireland shows up in Dallas, can he retain the courage of his convictions and move on without her?

Kathleen O'Donnell made a monumental mistake marrying, Kelsey Gilhooley. Her decision for entering the union, no matter how honorable, had made her life a living hell. Even though still married, she holds out hope for finding the man of her dreams. When she comes across her tall, dark-eyed Irishman in Dallas, Texas, will she be able to abandon happiness and walk away a second time?

Dermot looked around the room and its many patrons. Most were men dressed in black business suits. He noticed two women serving food and drinks, one a tall brunette, the other had red hair worn in a long single braid down the center of her back. He sincerely hoped the brunette served them because he wanted nothing else to remind him of Katie O'Donnell What-ever-her-married-name-was.
He closed his eyes to the memory and swore he caught a whiff of her scent. His imagination was playing a cruel trick. He thought to get up and leave, but before he could tell Ian he'd changed his mind about eating, a female voice whispered in a familiar brogue. "Jesus, Mary, and Joseph."

Kathleen O'Donnell Gilhooley almost swallowed her tongue. The very moment she'd prayed for since the day she'd left Ireland a year ago had materialized, yet she wanted to run as far and as fast as she could. She'd hoped to meet Dermot McTiernan dressed in her best, but obviously the saints had other plans.
Hands shaking, she smoothed the humidity-laden curls back from around her face, and blotted the perspiration from her forehead with the hem of her apron. Trying her best to hide her nervousness, she stepped forward, shoulders squared. "Dermot, is it really you?"
"It would appear so, wouldn't it?" He stared past her to the window apparently fascinated by the activity on the street.
There was no way she could've known how he'd react to seeing her for the first time in almost ten years, but his tone took her aback none-the-less.  She wondered if he'd gotten her letter explaining the circumstances surrounding her union with Kelsey Gilhooley.  From his reaction this morning, she guessed he hadn't. Either that or it hadn't made a difference.
Well, that was okay. They were here now and, hopefully, with time on her side, she could make him understand. "How many eggs for ye?"
Dermot's friend and the taller of the two by a couple of inches, spoke up first. "I'll have four, please."
Kathleen waited patiently for Dermot to speak. He took so long, she wondered if he'd gone mute in the last minute and a half.
Finally, he lifted his head, looked her straight in the eye but spoke to his companion, "Ian Benning, this is Katie O'Donnell."
"Pleased to meet you, ma'am." The man stood, offered his hand in greeting.
She shook his hand, correcting her name, "Kathleen Gilhooley, 'tis my pleasure." She directed her attention back to Dermot. "Will ye be havin' four eggs, as well?"
"Sure."
After turning in the order, she checked on the pan of biscuits she'd left cooking in the oven. She'd placed them in to bake just before going out to help Sarah take orders. Normally she liked to help out in the dining room instead of being cooped up in the over-heated kitchen. This morning, however, turned out to be a different story.
Following what just happened in the dining room, she certainly questioned her decision to leave her homeland. She might've expected anger when they met, discomfort to be sure. What he'd exhibited had been much different. He'd been distant and sullen. That scared her more than any outburst.
She put two biscuits on each plate and took them to the table. The man introduced to her as Ian, thanked her. Dermot said nothing until she grabbed the pot and poured each of them a cup of coffee. The hurt and betrayal in his eyes wounded her far more than any physical injury she'd endured in her marriage to that drunken monster Gilhooley.
As she turned to walk away, he grabbed her hand demanding, "What're ye doin' here?"
His tone set her off and, while she knew it wasn't rational, that he was trying to defend himself by making the first strike. But she'd learned to protect herself, too, and rose to the bait. "'Tis a free country and I can be here if I want." She backed away in an effort to pull her hand from his grasp, but he only tightened his grip.
"I want to know why you're here," he demanded through clenched jaws. "How could ye've done such a thing to me?"
Ian stood. "McTiernan, calm down and let her go."
"I'll let her go when she gives me a good answer."
Kathleen looked about the large room in a panic. Every one of the café's patrons watched the scene with interest including the owner, Mr. Browder, who was walking in their direction. She feared what Dermot might say and she needed this job to keep her room above the establishment.
"Can we talk outside?" she pleaded. With one last great tug, she wrenched her hand loose but the motion sent her reeling backwards into the table behind her where she sat in a plate of fried eggs and a bowl of strawberry jam. A couple of gentlemen, their mouths agape, helped her stand, after which they returned to their seats. Her face heated with humiliation, she straightened to face her boss.
"Mrs. Gilhooley, please return to the kitchen. I'll handle the situation from here." He turned to Dermot and Ian. "I apologize for the interruption to your meal. Let Sarah or me know if there's anything else you require."
Kathleen entered through the kitchen door, as Mr. Browder aided the diner who'd lost his eggs to her backside. The whole incident had been embarrassing enough without having to sashay through the dining room with bright yellow yolks streaming down her green skirts.
Mrs. Browder waited for her with a wet soapy rag. "What in the world caused all that commotion?"
"A reunion with an old friend that didn't go as well as I'd hoped."
"I see."
Sarah came into the kitchen carrying the customer's empty plate. Her look was one of wary amusement. "Mr. Browder said to replace Mr. Smith's breakfast right away."
Kathleen took the egg soaked rag from Mrs. Browder and, while the older woman fussed over cooking the gentleman's eggs, she found she didn't care if her dress could be saved. She really didn't even care if she lost her job.


The only thing that mattered to her more than her livelihood or a place to lay her head at night was Dermot. She had to talk to him and make him understand she'd married to ensure a good future for her parents. After that, well, she didn't know yet but, being the optimist she was, something was bound to turn up.

Well, there it is. I hope it peaks your interest. The book has a scheduled release for June 27 and will be available on Amazon in ebook and print.

As always, thank you for visiting today. I appreciate you sharing your precious time with me.