I've been trying to decide what subject to write about that might be of interest. Yes, there's a world of interesting ways I could go, but nothing that really tripped my trigger. I guess I'm pretty slow because the most interesting subject matter is right in front of my nose. Texas! And, I believe I'll start with the flags of Texas Independence. 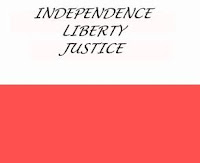 The first Flag of the Fredonion Rebellion.

Empresario Hayden Edwards contracted with the Republic of Mexico to settle 800 families in East Texas. Article 2 of his contract stated that "all those possessions which are found in Nacogdoches and its vicinity, with corresponding titles shall be respected by the colonists; and it shall be the duty of the empresario, should any of the ancient possessors claim the preservation of their rights, to comply with this condition."


Edwards proceeded to force settlers, both Anglo and native Hispanics, to move or pay him for their land. The Mexican government canceled his contract. In response to the cancellation, Edwards made an alliance with Cherokee Indians represented by John Dunn Hunter and Richard Fields and declared the "Republic of Fredonia" independent of Mexico under the banner shown. The two colors are thought to symbolize the alliance. Inscribed also in the white field were names of key participants in the alliance. After he failed to rally a significant number of Anglo settlers in the Austin, DeWitt, DeLeon colonies and other areas of Texas, he abandoned the cause and returned to the United States. The flag was said to have been displayed later at rallies for Texas independence in 1835.

Next is the Flag of the Harrisburg Volunteers.

This banner was carried by volunteers comprising Capt. Andrew Robinson's company from Harrisburg and designed by Sarah Rudolph Bradley Dodson in Sep 1835 for her husband, 1st Lt. A.B. Dodson and colleagues. Mrs. M. Looscan in her article in Wooten's Comprehensive History of Texas, who claimed her information came from Mr. Dodson who was still living in Alice, Nueces Co, TX in 1896, describes the red, white and blue flag at left, but with the star, said to be copied from an old military coat button or seal, in a blue field next to the staff. According to Dodson she related that the flag was flown by the company in the Siege and Battle of Bexar.
According to Creed Taylor in Tall Men with Long Rifles, this flag was "of ordinary solid color 'calico'-tri-colored, red, white and blue, emblazoned with a five-pointed white star, set in the red background, the three color bars being set perpendicular, or upright, the red, with the star next to the flagstaff......was much in evidence on the march from Gonzales to San Antonio, being borne by Second Lieutenant James Ferguson. I remember seeing this flag at our camp on the Cibolo, and I think it was carried on to Concepcion....I have heard it was left in the Alamo....and that fragments...were found among the ruins after the fall of the fortress."

Historian John Henry Brown states that this banner was flown at the Texas Independence Convention at Washington-on-the-Brazos beginning 1 March 1836 before the fall of the Alamo. This flag employing red, white and blue stripes with the single star is the earliest flag most similar in color and number of stripes to the Lone Star flag of today while retaining the broad vertical stripes similar to the motif of the Mexican tri-color. Absent was the color green and other symbols of the Mexican Republic. 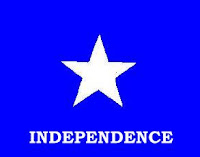 Scott's Flag of the Liberal Faction.

As dictatorial acts contrary to the liberal Mexican Constitution of 1824 by the centralista dictatorship began to mount, the number of Texans known as the Liberal Faction or War Party increased while the Conservatives rallied under the Mexican flags of 1824 hoping for a peaceful settlement with their adopted government and a return to the principles of local self-determination. This banner was apparently the earliest symbol of those who had abandoned hopes for reconciliation. A banner of similar color and design without the lettering was first used in 1810 when American frontiersmen rebelled against Spanish authorities at Baton Rouge in Spanish West Florida. Although never official, this design became famous as "The Bonnie Blue Flag" symbol in the Confederate States of America after secession in 1861.

Mrs. M. Looscan (daughter of Capt. Andrew Briscoe) in Wooten's Comprehensive History of Texas relates the description of its origin from veteran James L. McGahey: "It was suggested by Capt. William Scott of Kentucky who raised a company of men and lived near Lynchburg. Capt. Scott gave McGahey about 4 yards of pure blue silk which he took to Lynchburg to obtain a staff. There Mrs. John Lynch sewed a border next to the staff and Italian Charles Lanco painted the white star and the words "Independence" on the silk." Mrs. Looscan related that conservatives objected to flying the flag from the time it was unfurled by the company on their march to Gonzales in Oct 1835 to join Austin's Texian Federal Army which was being organized there. In the presence of Stephen F. Austin the flag was kept unfurled by James McGahey in his knapsack, but thought to be displayed at the Grass Fight and on 28 Oct 1835 at Concepcion. Legend says McGahey was wounded and gave the banner to Thomas H. Bell who may have carried it in the Siege and Battle of Bexar in Dec 1835. Bell returned to Goliad with Capt. Dimmitt's troops where the banner may have flown with others upon signing of the Goliad Declaration of Independence. Bell was with the group who carried the Goliad Declaration to San Felipe and the flag, in addition to Capt. Brown's bloody arm flag, is said to have been raised there.

Texas history was traditionally studied in seventh grade, at least it was a hundred years ago, when I was a kid. For the most part, though, we didn't study in depth about certain areas of history due to time constraints or, more to the truth, I've forgotten too much. I hope you enjoy what I bring to these posts and if there's any subject in Texas history you'd like to know more about, let me know. Below are links that may be of additional interest.

Thanks for visiting!   Carra