A Santa For Christmas

Christmas is such a special time of year. In our family, we celebrate the birth of Jesus, but we also enjoy the fun of Santa Claus. I get caught up in the magic of it all. I like to think that there's a little Santa in and for all of us.

In the spirit of the season, I've written this short story of hope, faith and maybe a little magic. I hope you enjoy it and may you all have a very Merry Christmas. 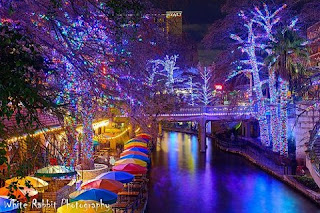 A Santa For Christmas

Merry Hernandez stopped atop the cross-over bridge, admiring the way the Christmas lights created magic along the San Antonio River Walk. The trees twinkled with lighted strands of multi-colored bulbs. Sidewalk cafes framed the San Antonio River on either side with their festive umbrella topped tables, decorative lights and poinsettias. The river reflected the myriad of lights back toward the starry sky overhead. All the pieces completed a perfect picture of the River Walk at Christmas.

Her Papa had told her as much when she was little. Each bulb twinkled just for her, he'd said, and her alone. She'd held onto that belief until she grew old enough to help him fulfill his role as Papa Noel or the better known Santa Claus. He'd load his boat with toys and navigate the river through the River Walk distributing his cache to eager children waiting patiently, no matter the weather. As a girl, she'd learned to share her precious river with the tourists who came to visit at Christmas then, as a young woman, she managed her father's company.

Merry and her brother, Tomas, had taken over completely a few years ago when Papa died. That had gone well, with Tomas playing Santa Claus, until last spring when he'd been killed in a robbery at a local convenience store. She'd been on the search for someone to play Santa when she received a letter from the company where they purchased most of their toys. Santa's Workshop was closing its doors.

With such short notice, no toys and no Santa, Merry knew she'd have to abandon her Christmas Eve run.  She hated to disappoint the children, but she didn't see any way she could pull it off. Finally, after multiple letters, e-mails and phone calls, she found a spark of hope. An S. Claus responded, saying he'd be in South Texas a day or two before Christmas. He hoped they could meet to discuss a solution to her problem on Christmas Eve. While she didn't really see a way to make it work, she also hated to give up without a try.

So here she stood on the bridge staring at the agreed upon meeting place, the Hilton Palacio Del Rio and the last hope for Santa's North Pole Special Delivery.

Sam Claus walked out onto the balcony of his suite at a River Walk hotel. He leaned on the railing and looked down through the trees lit with a million lights. The river boats floated past, all brightly lighted and full of tourists. This was his first trip to San Antonio and he was impressed.

For the life of him, though, he really didn't know why he'd been compelled to come here. He supposed the sheer number and varied ways of communication had piqued his interest, plus the sad plight of Ms. Merry Hernandez. Not that his reason for closing the business had any less impact for his family.

Five years ago his father, Samuel (Santa) Claus had been diagnosed with Alzheimer's disease. Sam had noticed symptoms for quite a while, but the process of diagnosing doesn't happen overnight. It was now impossible for his father to run a business and Sam had his law practice to keep afloat. With no one else he could trust at the helm, he'd decided to close Santa's Workshop.

This past week, his father had rallied. His long and short-term memory intact, he remembered his most important account, Santa's North Pole Special Delivery. He'd answered Ms. Hernandez's last email and insisted on making the trip with Sam. When the doctor agreed the trip might help and couldn't hurt, Sam gave in to his father's request. He turned when Samuel joined him on the balcony.

He followed his father's line of sight to the rock bridge crossing the river. The lights all converged in one spot at the center, lighting a solitary figure in such a way that made her appear ethereal. The power of the moment took his ability to speak or even to breathe.

"If you don't mind, son," the elder Claus said. "I think I'll eat in our room and let you two young folks enjoy the evening."

"Dad, are you sure? Is there anything I can get you?" Sam looked for any sign that his father might be slipping back into himself, but Samuel appeared normal.

Sam followed his father back into the room. He locked the balcony door, drew the curtain and placed the dinner order with Room Service. Dressed for his own dinner and after the food came, he headed downstairs to the hotel restaurant.

Merry gripped the stone ledge with all her strength. She wasn't sure what just happened, but for a few seconds all the lights around her had surged bright as mid-day. Her eyes locked onto a balcony near the top of the hotel where two men stood at the railing. One younger man and an older man with white hair and a full white beard who she would swear winked at her. Slowly the odd moment passed and Merry made her way through the crowd to the hotel.

After the dinner plates were removed, she sipped her water and watched Sam take a card from his wallet to pay for dinner. She liked the look of his hands – strong with long fingers, a piano player her mother would've said. Each time their hands had brushed during dinner she'd received a small jolt. Odd since the humidity was high due to rain being in the forecast. There might even be snow tomorrow on Christmas morning. A rare event for San Antonio, but not unheard of.

"Sam, I'm sorry about your father." They'd exchanged family histories during dinner, including their fathers' and Merry felt particularly saddened for him.

"Thanks." He handed the waitress the folded leather binder with his card and the receipt. When she'd returned and left again, he asked Merry, "Do you have plans for the rest of the evening?"

"Other than trying to scare up a Santa for tonight? No." She smiled. "What did you have in mind?"

"I've never seen the River Walk and I wondered if you'd be my tour guide."

"I'd love to show you my River Walk."

Sam escorted her out of the restaurant to the hotel lobby. Each time he came close to the small of her back, a light tingle zapped his fingertips. "Will you ride up with me to get my overcoat or would you prefer to wait here?"

A few minutes later Sam exited the elevator and charged straight to the desk. He motioned for Merry to join him.

When she approached, he said frantically, "My father's missing." He continued to give information to hotel security and local police officers then, after they left to search, Sam felt more lost than ever.

Merry took his hand, smiled and asked, "Instead of sitting here and feeling completely inadequate, why don't we look for him ourselves?"

Outside, Sam and Merry looked up and down the River Walk's flagstone and cobblestone paths, in sidewalk cafes, bars, other hotel lobbies, and gift shops. But Samuel didn't turn up. Sam was beside himself with worry. So many people milled about that, even if his father stood near him, they'd never see each other. He was about to ask Merry what the crowd was gathered for when he heard the song, "Santa Claus Is Coming to Town". The people in the crowd started cheering and holding their children up, some smaller tykes sat on shoulders.

He caught Merry by the arm and propelled her up onto the rock bridge. What they saw had both miracle and magic tied up with a bow. A cruise boat churned its way down the river toward them loaded with packages and unwrapped toys. As it approached, Sam could see that the man in the red suit on the back was none other than his father, Samuel (Santa) Claus.

Sam looked down at Merry and saw her tears of pure joy. He hugged her close, turning her around to face him. She mouthed a "thank you" then slipped her arms around his neck and kissed him hard on the mouth. It took him a micro-second to return her kiss. It was at that moment that Sam knew he would keep Santa's Workshop open. He would probably move the headquarters here to San Antonio where he'd live happily with Merry and his father.

Merry reveled in Sam's kiss, his warmth, and the beauty of the moment on her River Walk. She felt the presence of Tomas and Papa Noel and just before he passed beneath the bridge, Santa winked at her.
An original story by Carra Copelin
Posted by Carra Copelin at 8:37 PM