Galveston: A City with a History

There are so many cities and towns in Texas that own a piece of my heart. Galveston is but one of them. My first trip to the island was in 1965 when I was a junior at Sam Houston High School. I was a member of Vocational Industrial Training of America, and our class went there to participate at the State Conference.

You can imagine the fun we had with our first major trip away from home. I think there were eight of us along with our teacher, Mr. Kenneth Pickett, one other teacher I think, and my mother as chaperone. If memory serves, I think my younger brother tagged along, too. We stayed on Seawall Boulevard just across the street from the Gulf of Mexico and the beach.

A main attraction for many years was the Flagship Hotel which was built out on a pier into the Gulf. We stayed there once when our kids were small. Unfortunately, it didn't survive Hurricane Ike in 2008.

Now they've built a Pleasure Pier with rides and games for tourists.

I'm currently writing another book set in Galveston And I've discovered there were earlier places on the beach for fun and games called The Pavilion, Murdoch's Pavilion, Bath Houses, many of which were destroyed either by fire or hurricanes.

Before the 1900 Hurricane, Galveston was so lush and plush, it was thought of as the Wall Street of the South. Galvestonians liked to call their city the Coney Island of the South. The devastating Hurricane changed all that. 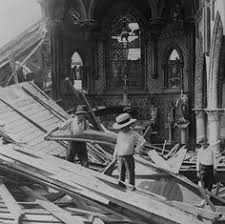 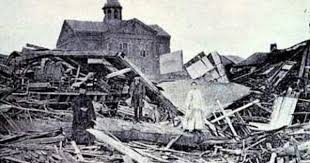 Over six thousand souls were lost on September 8th and 9th, 1900. The island was lost. In order to prevent this devastation from happening again, the people of Galveston built a seawall. Construction began in 1902 and the initial segment completed in 1904. From 1904 to 1963 the wall was extended from 3.3 miles to over 10 miles long.

After Hurricane Alicia in 1983, the Corp of Engineers estimated that  $100 million in damage was avoided because of the Seawall.

My characters, Faith and Joe, are not the first that I've put through the trials and tribulations of severe storms. Joe's father and step-mother, Ian and Matelyn O'Donnell Benning struggled to survive during the 1875 Galveston Hurricane, in my book, Matelyn and the Texas Ranger. Joe and Faith will have to deal with the aftermath of the 1900 Hurricane, sometimes referred to as Isaac's Storm, and we'll see how they do. 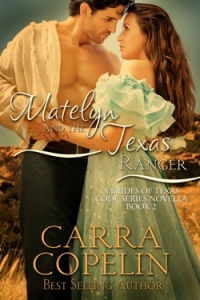 I have an e-book of Matelyn and the Texas Ranger for one commenter, so if you'd like to read about Joe's family before his book comes out this summer, talk to me. Don't leave me lonely down here all by myself.  =D

Thanks for stopping by,
Carra

Amazon Author Page
Posted by Carra Copelin at 10:47 AM