Wow, we almost got wet today. Our son, who lives west of us about fifteen miles, had a good shower, but the closest we came was the phone call from our daughter telling us the clouds were headed our way! So diasppointing. I walked down to close the gate this evening and heard the trees crying out for moisture. Oh well, as I've said before, summer in Texas.

The following are the next installments in the Texas flags portion of facts and trivia.
The descriptions are used in whole or in part from, http://www.tamu.edu/faculty/ccbn/dewitt/indepenflgs.htm. All attempts have been made to give credit where credit is due. 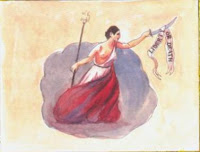 San Jacinto Liberty Flag of Sherman's Volunteers from Newport, Kentucky. Although there was no single banner representing the Texian Army at the time, of those that were probably displayed, this flag is most commonly associated with the Battle of San Jacinto. This banner was presented to Sherman's Newport Volunteers upon their departure for Texas by the ladies of Newport, Kentucky. Capt. Sherman's new bride, Katherine Isabel Cox, was chosen to make the presentation. Thousands are said to have waved the company off as they departed by steamer from Cincinnatti on the Ohio River. Legend says that Private James A. Sylvester was given a long red glove (a white glove in some accounts) by the daughter of the host at a departure dance just before leaving for Texas which he tied on the flag staff. It was said to be a "talisman" and inspired the ranks at San Jacinto.

Flying the flag, Sherman's regiment met Gen. Houston in Gonzales after the Alamo defeat and followed him into the Battle of San Jacinto. In Aug 1836, the flag was returned to Mrs. Sherman at Frankfort, KY with a letter: "Velasco, August 5, 1836, War Department. This stand of colors, presented by the ladies of Newport, Kentucky, to Captain Sidney Sherman, is the same which triumphantly waved on the memorable field of San Jacinto, and is by the government presented to the lady of Colonel Sidney Sherman as a testimonial of his gallant conduct on that occasion. A. Somerville (signed), Secretary of War. Approved: David G. Burnet." The flag was kept by the family for many years and later returned to the State of Texas in a ceremony in the House of Representatives in 1933. It was placed in custody of the Daughters of the Texas Revolution. The above artist's depiction is thought to be close to the original banner brought from Kentucky. The banner on the sword says "Liberty or Death." Over the years, artist's renditions and historical narratives describing the flag vary in the clothing on the upper body of Liberty. Wooten's color plate depicting the flags of Texas in his Comprehensive History of Texas in 1898 show an out of focus, diffuse, fully-clothed Liberty similar to the Statue of Liberty in New York. The rendition in Gilbert's 1968 edition of A Concise History of Early Texas: As told by its 30 historic flags depict Liberty's upper torso fully covered with a transparent blouse while the 1994 edition shows the depiction above. Attempts at restoration of the original banner are also thought to have altered the details of Liberty's clothing. The original flag was placed in a glass case behind the Speaker's podium in the House of Representatives in Austin. Reportedly insignia on the banner is barely detectable due to fading during storage and display over the years and the actual flag is only displayed from the backside which where an image is more discernable when the House is in session. (Image modified from C. E. Gilbert, A Concise History of Early Texas: As told by its 30 historic flags) 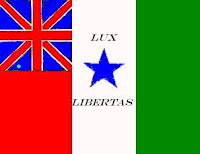 Suggested Independence Flags of Austin, Wharton and Archer. After the Independence Consultation of November 1835 in San Felipe, Stephen F. Austin, Branch T. Archer and William H. Wharton were sent to the United States to seek aid. In New Orleans they designed and proposed elaborate flags of independence that were never adopted, but highly symbolic of the current state of the evolution toward independence. Austin proposed a flag including the symbols shown at left, the British Union Jack indicating the origin of most Anglo-Texians, the colors of the banners of both the US and Mexico (red, white blue and green), the Lone Star for an independent Texas and the Latin words "Lux Libertas" to symbolize that Texas was the lone star of libertarian principles (light of liberty) in the Mexican Republic. 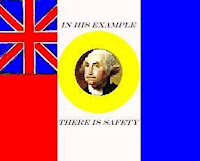 At the convention in November 1835, despite intense debate, the objective remained independent statehood in a Federal Mexican Republic under the Constitution of 1824 rather than a full declaration of independence as a sovereign Republic. Most prepared for the latter and the seemingly inevitable impending war. Others saw that long term independence might require the overt protection of the United States and eventual annexation. Wharton and Archer insisted on replacement of the Mexican green stripe with union blue. Moreover, they suggested a sun rather than the star with George Washington's head in the center and the words shown in the banner at left. In a letter to her brother Stephen Austin in New Orleans of 1 Jun 1836, Mary Austin Holley wrote from Lexington, Texas "Miss James has painted your flag on silk--Sun Washington and all--it is beautiful--it is to be presented by Henrietta--with an appropriate speech written for her by myself--Friday afternoon--How interesting to have you here! It is to be in Mrs. Harts lawn....All the military were to parade....I furnished the silk for the flag--Gen. McCalla the Staff and spear head."


I’m so glad you stopped by. Please let me know if there’s anything you’d like to see in my Texas posts and, as always, I love to hear from you.